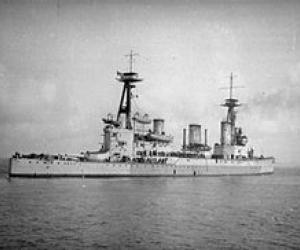 HMS Indefatigable was the lead ship of her class of three battlecruisers built for the Royal Navy during the first decade of the 20th Century. When the First World War began, Indefatigable was serving with the 2nd Battlecruiser Squadron (BCS) in the Mediterranean, where she unsuccessfully pursued the battlecruiser Goeben and the light cruiser Breslau of the German Imperial Navy as they fled towards the Ottoman Empire. The ship bombarded Ottoman fortifications defending the Dardanelles on 3 November 1914, then, following a refit in Malta, returned to the United Kingdom in February where she rejoined the 2nd BCS.

Indefatigable was sunk on 31 May 1916 during the Battle of Jutland, the largest naval battle of the war. Part of Vice-Admiral Sir David Beatty's Battlecruiser Fleet, she was hit several times in the first minutes of the "Run to the South", the opening phase of the battlecruiser action. Shells from the German battlecruiser Von der Tann caused an explosion ripping a hole in her hull, and a second explosion hurled large pieces of the ship 200 feet (60 m) in the air.  Of her crew of 1,019, only three survived. While still in the water, two survivors found Indefatigable's captain, C. F. Sowerby, who was badly wounded and died before they could be rescued. Two survivors, Able Seaman Frederick Arthur Gordon Elliott and Leading Signalman Charles Farmer, were rescued by the German torpedo boat S16. A third survivor, Signalman John Bowyer, was picked up by another unknown German ship. He was incorrectly reported as a crew member from HMS Nestor in The Times on 24 June 1916.

Son of Patrick & Mary Cahill of William St, Wexford.  Indefatigable was sunk on 31 May 1916 during the Battle of Jutland, the largest naval battle of the war.

Son of Gregory and Margaret Furlong nee Doyle of Yoletown, Ballycullane, Co.Wexford. His father was an agricultural labourer. Navy gives his date of birth as 17th January 1892, but CWGC state his age as 27. In the 1901 Census, James is shown as 11.

Son of Patrick and Margaret Hogan nee Burke, 24 Cumberland Street, Devonport. His father, born in Limerick, was Colour-Sergeant in 3rd Royal Irish Regiment, his mother was born in India. By 1901 his father was a wharf labourer residing at 33 King Street, Devonport. Children were Mary (13), Gladys (11), Patrick (7), Charles (5), Margaret (3), and Annie (9 months).